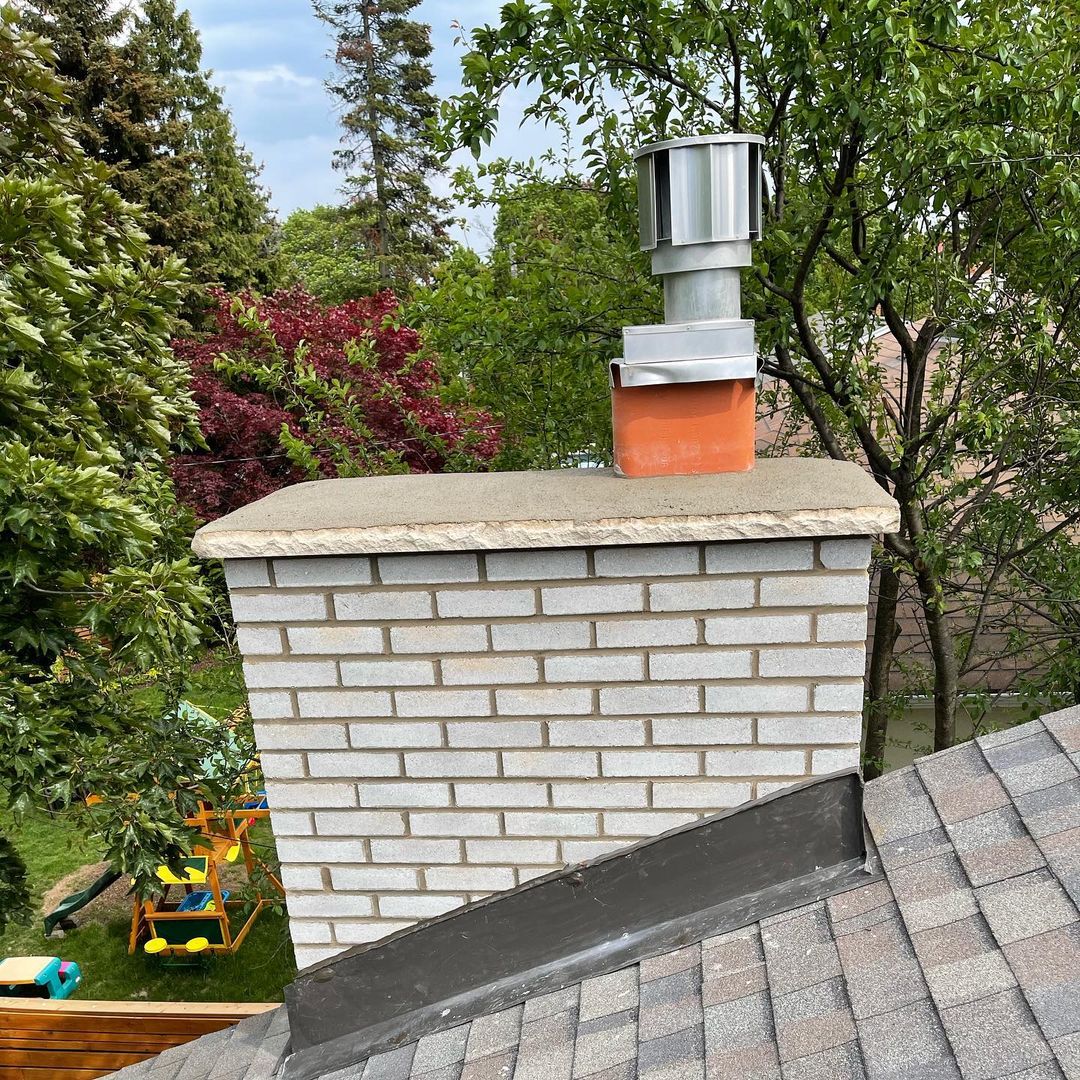 Simply put; tuck-pointing is the process of repairing deficient mortar joints between courses of bricks on a chimney, exterior masonry building walls,brick piers or masonry retaining walls. The process also involves the removal of individual bricks which exhibit shaled surfaces, cracking, or where the inner core of the bricks is exposed.

The process of completing tuck-pointing work is fundamentally simple in theory, but requires the finesse of a skilled mason in order to be efficient, and result in a clean finished project.

When completing large areas of tuck-pointing, the mason must be observant that removal of affected areas is completed in a strategic manner so that structural integrity of the remaining masonry wall surfaces will not collapse in mid process. This is especially true in areas which surround wall openings such as doors and windows and where masonry walls meet foundation structure.

In the context of tuck-pointing a home; a typical project involves protecting adjacent areas from dust and debris and the erection of scaffolding. Such scaffold must be anchored to the exterior walls as towers progress upward on the building. Due to possible liability issues, there are occasions such as on public sidewalks and busy streets; that a scaffolding company is utilized to obtain permits,drawings and ultimately the erection of the scaffolding platforms.

On more basic jobs like tuck-pointing a chimney or lower surface walls; the mason will erect their own scaffolding. Scaffold is also necessary to support the weight of multiple trades persons working in tandem, and associated bricks and mortar supplies.

Once the project has been staged, work may begin in earnest.
Deficient areas include courses where original mortar exhibits voids or is soft and sand like. Using a raking tool, the mason scrapes and reams the mortar joints to rid the area of deficient or soft mortar.

In conjunction with such work, grinders are used to extricate large areas. Older bricks which may be salvaged that retain their structural integrity are chipped and cleaned to be set aside for re-use. Where bricks are not salvageable; the mason seeks to replace the area with similar or closely matching new bricks.

Certain heritage colours of bricks in certain cities are difficult to come by as the bricks are no longer being manufactured. Sourcing such brick products can be time consuming and often involves harvesting such products from salvage distributors. Other matching options can include using original building brick on areas which can be observed on the building, and substituting alternative bricks in areas which are less visible.

Once areas that are prepared for replacement bricks and mortar are ready, all dust is removed and the areas are wet down so that new mortar will bond and resist shrinking back after drying. Re-use bricks may be soaked in buckets of water so that they will retain an amount of moisture, when being laid.

The mason prepares the mortar mix (typically one part fine brick sand to two parts cement) in a mixer or by hand in a wheel barrow for small jobs. An important masonry skill involves the ability to add pigment to new mortar to closely replicate the colour of the existing mortar.

Where installing a brick may be involved; the mason will take the water moistened brick and “butter” the brick with mortar on three sides, and then insert the brick strategically. As part of the process; insuring that the mortar bed is of a uniform thickness. The process continues until an exposed area has been “knit” in with the existing bricks.

Once mortar between brick courses has been applied; the mason will insure a tight and uniform pack of mortar in the joint area, and will use a “slick” (a narrow bar tool which has a ball shape on the end); tool tool out the repaired joint areas and provide for a neat and uniform finish. In tandem; the mason may use and old rough carpet and wire brush, etc., to clean adjacent brick surfaces of residual mortar.

The process is repeated over all affected wall areas until restoration has been completed. To note is that tuck-pointing work may also require the replacement of structural components associated with openings in door and wall areas.

As an example; in century plus homes and buildings, where supports above windows and doors may have been constructed of wood, rot may be an issue. Modern building codes will dictate that steel lintels or steel header beams must be used to support structure above such areas, and prior to wood supports being replaced.

The steel supports must be supported by the brick structures adjacent to such openings and need to be anchored and mortared in.

Similarly, window or door openings may have limestone or cement sills as part of their original architectural character. Such details must also be replaced by the mason if cracked, eroded ,or otherwise representing a water ingress or structural hazard.

In the eastern areas of Canada and the U.S., tuck-pointing repairs are commonly required near the base of house walls, above the foundation area; where salt has been used and where snow and ice may commonly accumulate. Similarly, brick porches, columns and support piers are commonly areas effected in the same way.

Due to aging, exterior masonry walls require such work past the fifty year mark most typically. Where chimneys are concerned, often after thirty years tuck-pointing work is required. The need for such work on chimneys can result from water ingress due to cracks in cement capping or in the instances where chimney flues were utilized to exhaust furnace gases and prior to the requirement for metal liners.

Where chimneys exhibit severe deterioration and brick erosion, it is preferred to rebuild such chimneys as a requirement for structural integrity.

Professional masons will price tuck-pointing projects in the following manner:
1) As a unit price per brick, usually including a minimum charge to cover setups
2) By the square foot, based on visible deterioration of select areas.
3) By the job, where an extensive amount of brick and joint restoration is evident.

To learn more about tuck-pointing, chimneys, brick and block rehabilitation and other masonry services, contact the professionals at: www.avenueroadmasonry.com or visit Avenue Road Masonry on YOUTOUBE™.

previousFoundation Cracks - How To Fix It